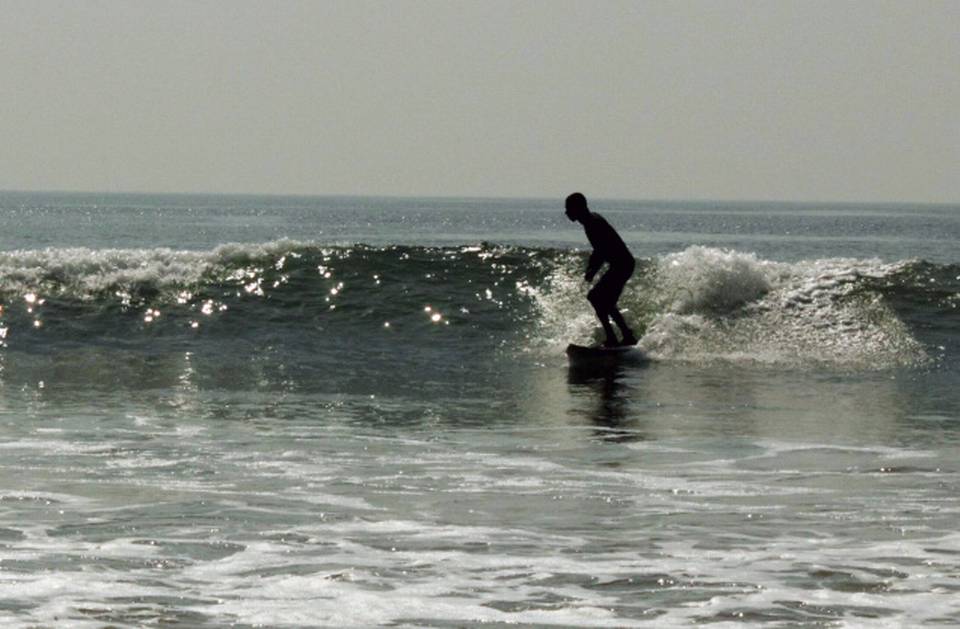 The blue waters of the Bay of Bengal and an opportunity to see surfers from across the world battling the waves. No more reasons are necessary for me to land up at the country's first surfing festival. An early morning flight to Bhubaneshwar and a three-hour cab ride later, I find myself at the Konark Puri Marine Drive beach. Long stretches of uninterrupted sand. The February breeze spiked with electronic trance. Decorations of bamboo, strings of colourful threads and wool. Musicians oblivious to their surroundings. And photographers, lots and lots of photographers, amateur and professional, strolling around in search of the perfect shot. Everyone here seems to be travelling light, needing nothing but air to breathe and the sea to set their sights on. I feel like an intruder with my heavy bags. Even my mobile phone has joined the party. It refuses to work.

The ceremonial inauguration, with a performance of the traditional Chaiti Ghoda dance, feels out of place in this bohemia. The surfers grab their boards and lunge into the waters. There are about 60 of them, from New Zealand, Hawaii and Australia, alongside surfing communities from Mahabalipuram, Vishakhapatnam, Puducherry, Gokarna, Manipal and Kovalam. “It is a beautiful beach and not one bit crowded,” says Yogi, attempting to manage both his surfboard and the curtain of wet dreadlocks that closes over his eyes. In Hawaii, he says, a beach like this will be crowded with 400 people. He spent the past six months in Sri Lanka as a surfing instructor. He will spend the next six months in India. “I started surfing when I was five. I learnt it from my mom and dad. Swimming and surfing, that's the only thing we know.” He adds, somewhat redundantly, that swimming is one of the key skills needed to survive in Hawaii. As if anyone in that island paradise would choose to sit on a shaded part of the shore and just read a book.

Nomadic surfers like Yogi fostered the Indian surfing community. Anudeep, a professional yachter who likes to be called Andy, began to learn surfing five years ago when he came across a surfer from the US. “The surfing community is a small one where everybody knows everybody,” he says from Visakhapatnam. Apart from groups like Surfing Yogis, The Surfing Swamis, people like Mukesh from Mahabalipuram have established small surfing institutes, whose graduates are now skimming across these waves. A small crowd gathers around the shore, squinting and craning their necks to catch these surfers and the effortless ease with which they navigate the turbulence of the sea. A man with his camera and tripod wades in, braving the waves to freeze these moments for an eternity. Du Fengyan's journey started on a bicycle from Beijing, continued across Vietnam and Cambodia, and has now ended in India. “You don't need a lot of money to travel,” he says. He befriends the locals and stays with them. There are days he doesn't have to spend more than Rs.100. He will now head to Pakistan.

There are people everywhere, and everyone has a story to narrate. An artist named Vinay Pateel, in a white T-shirt and geeky glasses, is setting up his works in a corner. He was an engineer. He hopped off the treadmill in order to specialise in digital art, a sample of which is on display in the logo on the T-shirts for the event, that of a bearded yogi communing with the waves. Elsewhere, the logo seems to have erupted to life. There are many yogis around me, communing with the waves and with each other. The India Surf Festival, contrary to the name that suggests the commingling of big-name detergent manufacturers, is a melting pot of the most interesting people. A textile designer and with her documentary-filmmaker husband. An engineer turned bookshop owner. An animation artist with her sporting mother.

As the sun sets, Argentinean Sebastian Vilarino begins to juggle in rhythm to trance music. He is joined by the Indie band The Mavyns, with their quirky rendition of songs of The Ventures, and Tribal Flora, a music band from Mumbai that experimented with mouth harps, didgeridoos, drums and flutes. Trip Tandav opted for psychedelia, an amalgam of Sanskrit slokas and bhajans underscoring live painting by artists from the Nova Collective. I spend my first night at the surfing village, and the next morning I am greeted by friendly voices which made me forget I am on my own. Everyone's a friend here, and every friendship has a story. Sand artist and sculptor Sridhar Dash has befriended Scott Jeffery, an Australian who quit his television job in London and began globetrotting on a bicycle with little more than a tent and a very effective GPS. Jeffery has learnt that Dash had no online presence, and he has promised to enshrine his friend in a website before he heads out east. Sanjay Samantaray, founder of Surfing Yogis, the organising group, says, “A surf festival is about 50 per cent surfing and 50 per cent art.” It is also about people, one hundred per cent.